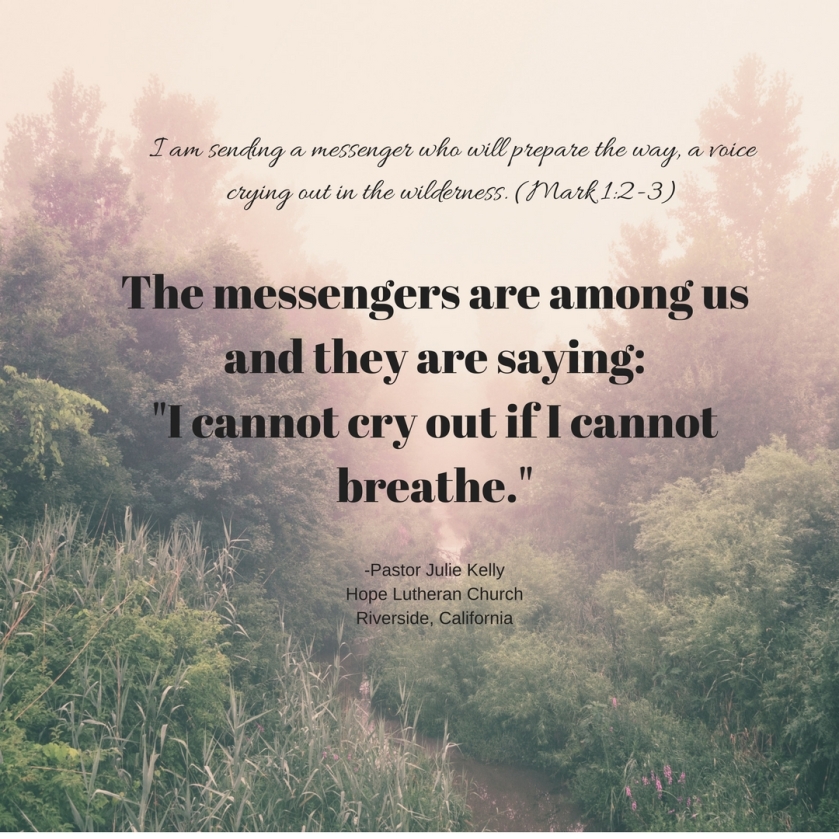 A voice will cry in the wilderness, prepare the way.

Thanks to the other Gospels, we know more about John. I think today we hear that he wore camelhair and ate locusts and honey and just think that people did weird things back then. But even for his own time, John was, well, weird. He was a nonconformist- a subversive- an activist. Not too unlike his cousin who would come after him.

So it is no wonder that he was in the wilderness. We have a way of looking at the people who do not look, act, eat, or speak like us and making them feel unwelcome. If they are connected to issues that cause problems and upset the status quo, we quickly blame them for their own circumstance and distance ourselves, so that we will not be pulled into their mess. We push them off to the sides, to the places where we will not have to notice them, to the other side of the street, the tracks, the border and if necessary, to prison so we don’t have to face their differences and the issues they bring up that make us uncomfortable. We send them to the wilderness and we silence their voice among us.

The fires have left me breathless this past week. Many of you also have a cough, a tickle, a little stuff in your throat. For me, it has activated my asthma. And when I was asked if I could do a one day response for the Red Cross, I had to decline. In the end, deciding I could not risk my breathe. Because if I cannot breathe, how can I speak? If I cannot speak, how can I share the truth of God’s love.

And that got me thinking about our Gospel today and why we only ever seem to hear the truth cried out from the wilderness, from the outer edges and un-centered places? Why don’t we hear these voices of truth everyday among us? And I realized that the voices of truth are already among us, but we have silenced them. They are breathless and cannot cry out.

They are the women silenced and scared by the actions of men and power brokers who left them with no recourse but to put up and shut up. Who kept their silence and were blamed and manipulated by shame. If only the women like Bathsheba and Dinah had a #metoo movement to encourage them.

They are the babes left on beaches, drowned as they attempt to escape certain death while powerful men make decisions on who can live where. Men who will wipe out an entire generation of male children for their own political purposes and control. I wonder if the mothers of Syria think of the mothers who buried their babes because of King Herod?

They are the ones who don’t fit our laws of what right looks like, men in women’s clothes and bodies, dark-skinned or dreadlock wearing, upright citizens who just want to live and let live, who are precious children of God and are ignored when beaten, and left to die under the baton or on the road to Damascus. I wonder if the gay, brown skinned, or Hindi speaking person attacked for just living take their last breathes wonder where their good Samaritan is.

We hear their stories and turn away- they make us uncomfortable and we focus our anger on the person who takes the picture of the dead child rather than on the person responsible for circumstance that led to his running for his life. We hear of the women who speak truth of the Matt Lauer’s and Garrison Keilors of the world and our responses tend to be wondering if it is the truth why did they wait so long or upset that our favorite voices and faces are gone because someone had to make a “fuss”. Anger at our our discomfort rather than the fact a woman was violated and felt she had no recourse until now when a groundswell of others are gaining courage because they now know they do not stand alone.

We take their breathe and value when we tell a black man that if he just follows the law and the directions of the officer he will be fine. Because the truth is and video after video reveal in stunning proof, that it won’t be fine.

We steal the breath of every victim who tries to cry out every time we question them and doubt them in order to make ourselves more comfortable that we loved or lived among a place where a perpetrator also lived.

It is no wonder that John called the religious folks a brood of vipers. We are dangerous to be among.

The voices are among us- with truth to be told, with the message of Christ in their stories, in their faces, in their very breath. And until we give them space to be heard, protection to speak, support to share the difficult parts and love to heal the gaping wounds from which they cry, they will be breathless and thus, speechless. We will not hear their cry and we will not prepare the way.

Christ came and put himself in a place of speechless breathe- he began his life gasping for air so that he too might cry out in our world. And he did- he cried out in the temples and he cried out in the desert. He cried out above the wind and waves and he cried out over death. He used his very breathe to fight the centered set, the ones who would tell him he was a problem maker and that he just needed to tone it down a little or maybe tell his story in a way people could hear instead of causing so much turmoil. And when he would not play by the rules, when he continued to speak the truth and use his privilege and breath to cry out for the least of these, to cry out and share the Gospel of God’s love for every human being and a promise of salvation for the small cost of faith alone, they nailed him to a cross where the death is one of suffocation- where the very breathe is taken even as he yet lived. And in his last breathe, he cried out one last time to beg God in heaven to forgive us for failing to hear.

Advent is our time to wait and ponder, to prepare the way beginning with our own hearts. I wonder, are we willing to ponder our role in taking the very breath from the voices of truth among us? Can we commit to protecting the breathe of our savior and his message among us? Will we stand side by side to protect an innocent who simply wants to live and breathe? Will we put on the itchy camel hair coat and let our hearts and spirits live in the discomfort of honesty and truth so that we too might hear the voice crying out and prepare the way for the Lord?

It will be uncomfortable. It isn’t easy to hear and walk with the voices of truth,. It isn’t comfortable to speak the truth. It isn’t popular to be different and stand for what right looks like. But it is what our Savior did for us and what in our loving response, we should do in return. Christ did not come to a young girl in an illegitimate way to make us uncomfortable. He came in poverty and humility to remind us of our own.

The voice in the wilderness does not just break the silence- it shatters it. It cries out from broken hearts, broken bodies and broken spirits.

Will you be humbled and give breath to the voice that needs to cry out here and now, among us? Will you call the one in from the wilderness and give them shelter, comfort, and love? Will you hear their story and love them as Christ did for you? Will you prepare the way?

Pastor of St James Lutheran (E.L.C.A) and Episcopal Church of the Saviour, two congregation in the San Joaquin Valley of Central California. Even though the diploma reads "Master of Divinity," the learning continues and I have the wrong body parts to earn a "masters" so I claim Mistress. I lean into this pastoral role more each day, learning to balance vocation and family, life and passion, living and loving. View all posts by mistressofdivinity

Sermons of the Valley

The sermons of Pastor Julie Kelly for the people of St James Lutheran and Episcopal Church of the Saviour in Hanford, CA.  Her sermons are rooted in her journey with them in daily life.  Learn more about the congregations at ecsaviour.org or stjameshanford.org