A sermon for the people of Hope Lutheran Church in Riverside, CA.

So, here is your greek for the week- if you read the gospel, the woman stood up and began praising God. The word for praise is doxazo- which more often means to think of, to suppose or consider, but in this context means to praise or extol.  And here is the most important part of the translation: it is imperfect. Literally. The imperfect tense means it didn’t just begin happening, it didn’t just happen and then end- but that she kept on praising God. She was stood up- but didn’t just praise God- she kept praising God.

The flip side of justice through Christ lets us see in a whole new way- to praise not just for the moment, but in perpetuity- now and ongoing.

Our scripture is filled with this Messiah who calls us over like this women- and with all the audacity, touches our unclean, bent-over bodies and gives us new vision- vision that stands us up to look in his face- to see into his eyes- to see the world through his love.

The most dangerous thing we will do as Christians is choose to bend back over and only see the world.  We are no longer bound to this- bound to be bent over in pain and limitation. Bound to a vision that cannot see others and their precious equality with us.  It took hundreds of years to break the justification and overturn unjust laws of slavery- but the mentality remains. We are and were freed to stand upright and value black and brown skin as much as white skin.  But in many places, even in this place today, some still choose to remain bent over into the bondage of the slavery justification mindset.

But not this woman. He didn’t just announce freedom to her- he touched her and gave her the ability as well as the right to stand up and see. She is upright and looking at Christ.  Now she can see where she is going. Now she can see that God is merciful and gracious, slow to anger and abounding in steadfast love. Not that she didn’t see that before, but it’s different when the love of God becomes incarnated in your very self. She is now able to see what and who Jesus sees — who needs to be cured. Who is in bondage. Those who are bent over with the weight of a world that continues not to care.

This gospel, the gospel of Jesus Christ, isn’t about seeing through socialist or capitalist eyes, not seeing through conservative or progressive eyes, through white, black, brown eyes, but seeing through eyes clearly, without obstruction, from a whole new viewpoint.  Freed to see what Christ has done for us- who he was, who he is, who he will always be- a savior who tells us to stand up and gives us the ability to do so. A messiah who renames us and calls us heirs of the kingdom- daughters and sons of Abraham, precious and countless as stars in the sky.  For all, for you, for God. 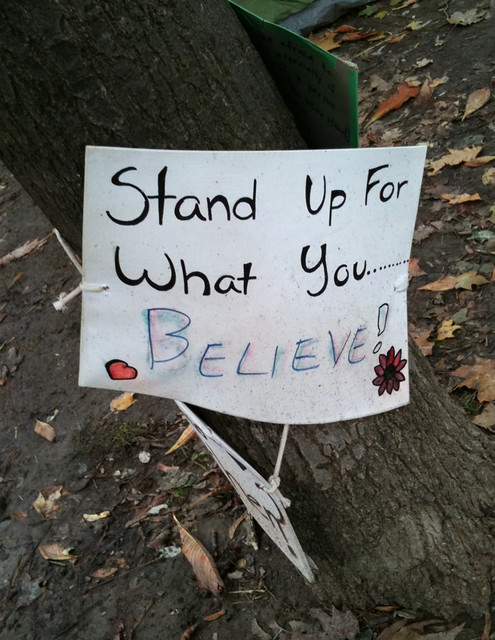 Pastor of St James Lutheran (E.L.C.A) and Episcopal Church of the Saviour, two congregation in the San Joaquin Valley of Central California. Even though the diploma reads "Master of Divinity," the learning continues and I have the wrong body parts to earn a "masters" so I claim Mistress. I lean into this pastoral role more each day, learning to balance vocation and family, life and passion, living and loving. View all posts by mistressofdivinity

Sermons of the Valley

The sermons of Pastor Julie Kelly for the people of St James Lutheran and Episcopal Church of the Saviour in Hanford, CA.  Her sermons are rooted in her journey with them in daily life.  Learn more about the congregations at ecsaviour.org or stjameshanford.org